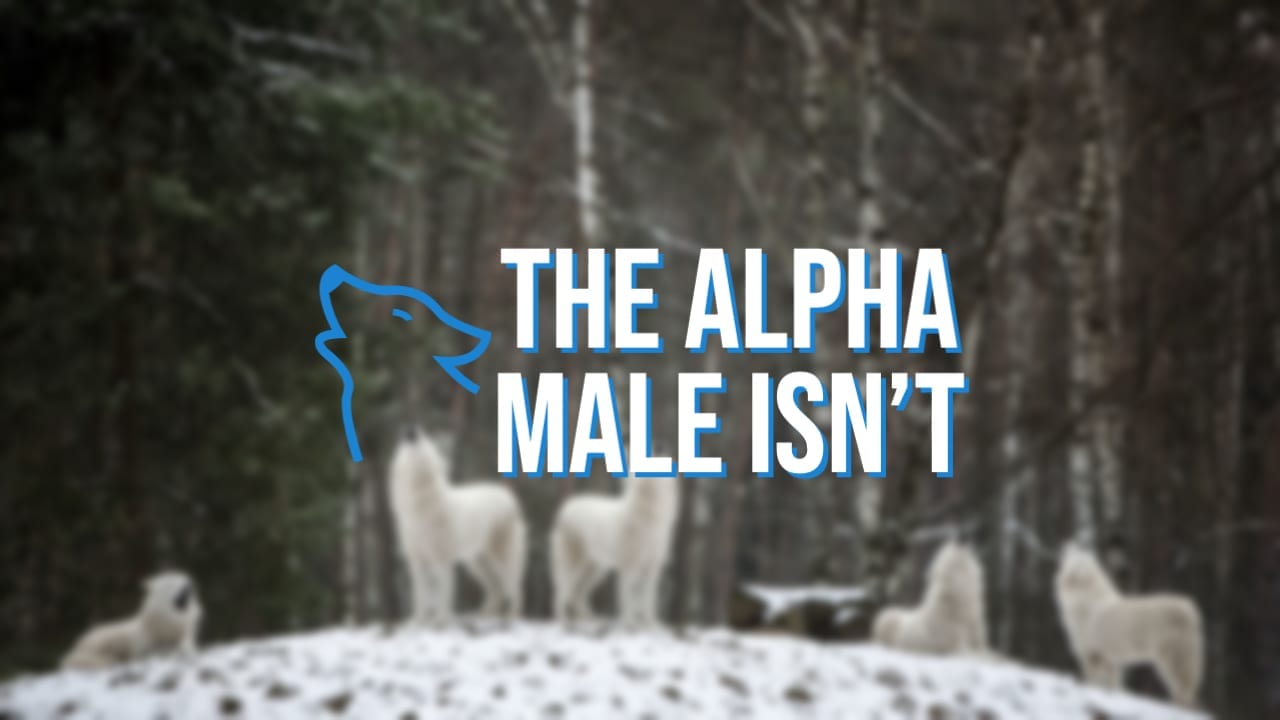 In 1947 Rudolf Schenkel wrote about wolves and created a freaking phenomenon that would alter the course of history, for toxic masculinity. David Mech, the world's most profiled wolf researcher, realized this was a mistake and has been trying to change this. He still is, to this day.

Rudolf wrote about these wolves who created this violent hierarchical social structure.The Alpha male kept control, there were beta males, omega males, all of the greek alphabet eventually made it into this mix. Whether Rudolf had anything to do with the expansion letters or not is irrelevant. The point is, it became the thing. Men of the 1950’s had these animalistic totem animals they could identify as… which, if you’re following today's trans issues, is REALLY funny.

But it has been the standard for so long, even to today. It’s the foundation for what is known as toxic masculinity. This idea that in order to be a good male, you have to be: aggressive; dominant; assertive; take control of your mate; control your pack (kids) with brutal decisiveness; eat first; act like your gender and make sure your mate acts like theirs; etc… All of these ridiculous notions bled out around these concepts, from what I’ve seen

Sure, other societal factors fed into it as well. But, I’ve watched countless online discussions where people defend acting like the douche because that’s what wolves do in nature and they are just being alpha males so, “deal with it.”

The problem was that Rudolf was studying wolves in captivity. Captured, kept in tiny enclosed spaces. These were terrified and anxious creatures. They weren’t the free and noble creatures that wild wolves are. Mech has noted that in nature, the wild, that wolves don’t form these hierarchies Rudolf identified because packs generally consist of two parents of their own children. The leaders of the pack are literally mom and dad.

There’s no Alpha male and female wolf, it’s just the parents. Any aggression seen is mom and pops spanking the kids, the amount of food doled out? It’s based on what they feel is appropriate. Aggressive towards a male adult? It’s probably courting one of their daughters.

All of the posturing that 1950’s men passed down to their son’s about how a man is supposed to act, because they believed in this Alpha male concept is just… wolf-shit. Literally.

Pack leaders make sure their kids eat, protect older members, watch out for the younger ones, they don’t kill their own kids, and they sure don’t need to assert dominance anymore than ANY father needs to against his own son, or towards an interested male poking his nose around one of his daughters. They just lead by example, showing how to hunt, how to feed yourself, how to do things.

All of the toxic masculinity traits we see are literally men acting like scared, damaged, captured wolves.

It’s frustrating. Because humanity can be so much more.

We can learn from nature. Watching wolves is amazing. They nurture their young, accept them for who they are. Play with them, feed with them, train them, and so much more. So don’t be fooled. Alpha males aren’t. It’s a damaged concept.

"By continuously controlling and suppressing all types of competition within the same sex, both ‘alpha animals’ defend their social position."

As early as 1947, Schenkel mentioned that it was possible that wild wolf packs consisted of a monogamous pair, their puppies and one- to two-year-old pups. But this information was overlooked.

These outdated ideas, ideas literally proven wrong by researchers much more qualified and trained, they need to die off. They need to be replaced by the true ideas of the nurturing wolf parents.

David Mech studied wold packs on Ellesmere Island in Canada for 13 summers. He was able to get close enough to study them up to 3 feet away at times, over several years. His discovery led him to struggle to dismiss these outdated Alpha Male and Female concepts with a passion due to the fact that what was usually the “Alpha Male and Female” were just mom and dad.

“Dominance fights with other wolves are rare, if they exist at all. During my 13 summers where I observed the pack, I saw none.”

Mech wrote in an article entitled “Alpha Status, Dominance, and Division of Labor in Wolf Packs”.

So let’s do what we can to put to rest this ridiculous notion of the ‘Alpha Male.’ It’s based on studies of damaged, captive and unhealthy animals. A true “Alpha Male’ according to the historically accurate studies would be a deranged lunatic wolf. Not a healthy, happy leader of a pack.

I’ve been a huge fan of wolves throughout my life. I’m quite thrilled to know they are actually kinder than most humans in fact, going so far as to raise their kids with more compassion than the average American family as far as I can tell. Accepting them for all that they do, letting them chase butterflies or hunt mice regardless of what gentalia they may carry.

Peace, Love and Howl at the Moon