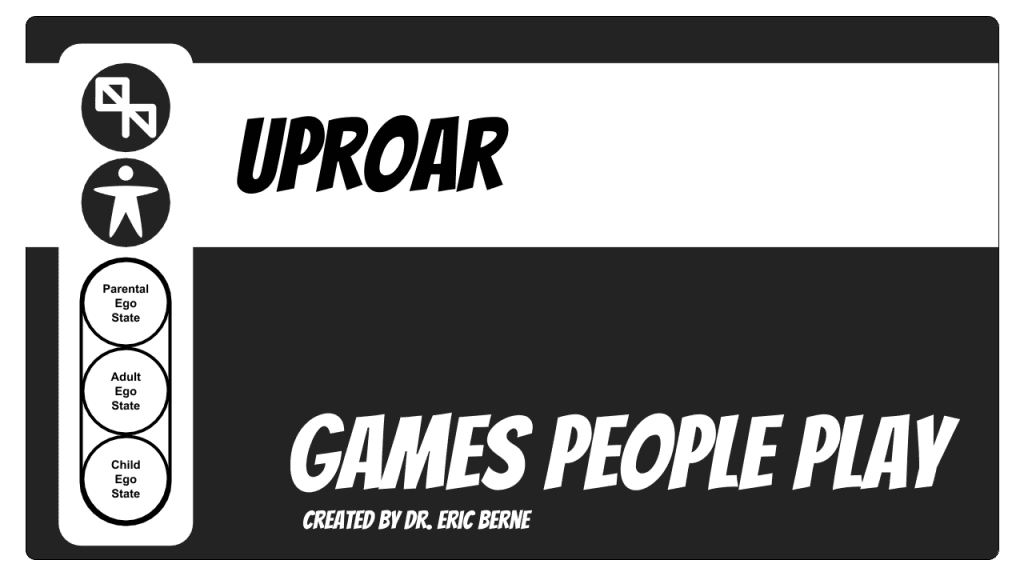 The classical game is played between domineering fathers and teen-age daughters, where there is a sexually inhibited mother. Father comes home from work and finds fault with daughter, who answers impudently, or daughter may make the first move by being impudent, whereupon father finds fault. Their voices rise, and the clash becomes more acute. The outcome depends on who has the initiative. There are three possibilities: (a) father retires to his bedroom and slams the door; (b)daughter retires to her bedroom and slams the door; (c) both retire to their respective bedrooms and slam the doors. In any case, the end of a game of ‘Uproar’ is marked by a slamming door. ‘Uproar’ offers a distressing but effective solution to the sexual problems that arise between fathers and teen-age daughters in certain households. Often they can only live in the same house together if they are angry at each other, and the slamming doors emphasize for each of them the fact that they have separate bedrooms.

In degenerate households this game may be played in a sinister and repellent form in which father waits up for daughter whenever she goes out on a date, and examines her and her clothing carefully on her return to make sure that she has not had intercourse. The slightest suspicious circumstance may give rise to the most violent altercation, which may end with the daughter being expelled from the house in the middle of the night. In the long run nature will take its course—if not that night then the next, or the one after. Then the father’s suspicions are ‘justified’, as he makes plain to the mother, who has stood by ‘helplessly’ while all this went on.

In general, however, ‘Uproar’ may be played between any two people who are trying to avoid sexual intimacy. For example, it is a common terminal phase of ‘Frigid Woman’. It is relatively rare between teen-age boys and their female relatives, because it is easier for teen-age boys to escape from the house in the evening than for other members of the family. At an earlier age brothers and sisters can set up effective barriers and partial satisfactions through physical combat, a pattern which has various motivations at different ages, and which in America is a semi-ritualistic form of ‘Uproar’ sanctioned by television, pedagogic and pediatric authorities. In upper-class England it is (or was) considered bad form, and the corresponding energies are channelled into the well-regulated ‘Uproar’ of the playing fields.

The game is not as distasteful to the father as he might like to think, and it is generally the daughter who makes the antithetical move through an early, often premature or forced marriage. If it is psychologically possible, the mother can make the antithetical move by relinquishing her relative or absolute frigidity. The game may subside if the father finds an outside sexual interest, but that may lead to other complications. In the case of married couples, the antitheses are the same as for ‘Frigid Woman’ or ‘Frigid Man’.

Under appropriate circumstances ‘Uproar’ leads quite naturally into ‘Courtroom’.