There is no role listed.
Party Games, Psychology, Transactional Analysis 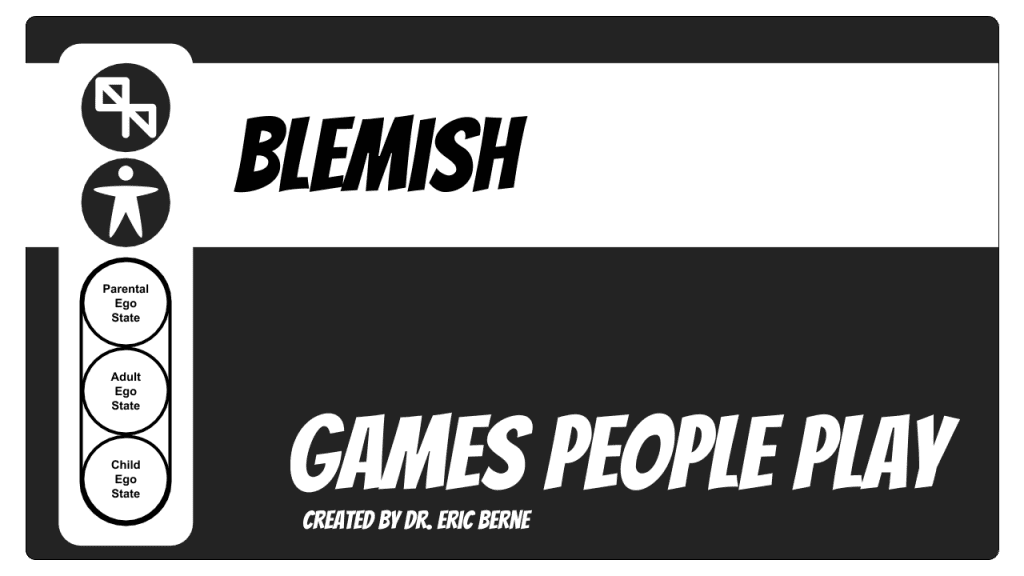 This game is the source of a large percentage of petty dissension in everyday life; it is played from the depressive Child position ‘I am no good’, which is protectively transformed into the Parental position ‘They are no good.’ The player’s transactional problem is, then, to prove the latter thesis. Hence ‘Blemish’ players do not feel comfortable with a new person until they have found his blemish. In its hardest form it may become a totalitarian political game played by ‘authoritarian’ personalities, and then it may have serious historical repercussions. Here its close relationship with ‘Nowadays’ is evident. In suburban society positive reassurance is obtained from playing ‘How’m I Doing?’ while ‘Blemish’ provides negative reassurance. A partial analysis will make some of the elements of this game clearer.

The premise may range from the most trivial and extraneous (‘Last year’s hat’), to the most cynical (‘Hasn’t got $7,000 in the bank’), sinister (‘Not 100 % Aryan’), esoteric (‘Hasn’t read Rilke’) intimate (‘Can’t hold his erection’) or sophisticated (‘What’s he trying to prove?’). Psychodynamically it is usually based on sexual insecurity, and its aim is reassurance. Transactionally there is prying, morbid curiosity or watchfulness, sometimes with Parental or Adult concern charitably masking the Child’s relish. It has the internal psychological advantage of warding off depression, and the external psychological advantage of avoiding the intimacy which might expose White’s own blemishes. White feels justified in turning away an unfashionable woman, a man without financial backing, a non-Aryan, an illiterate, an impotent man or an insecure personality. At the same time the prying offers some internal social action with biological gain. The external social advantage is of the ‘Ain’t It Awful’ family—Neighbourly Type.

An interesting sidelight is that White’s choice of premise is independent of his intellectual capacity or apparent sophistication. Thus a man who had held some responsible positions in the foreign service of his country told an audience that another country was inferior because, among other things, the men wore jackets with sleeves that were too long. In his Adult ego state this man was quite competent. Only when playing a Parental game like ‘Blemish’ would he mention such irrelevancies.