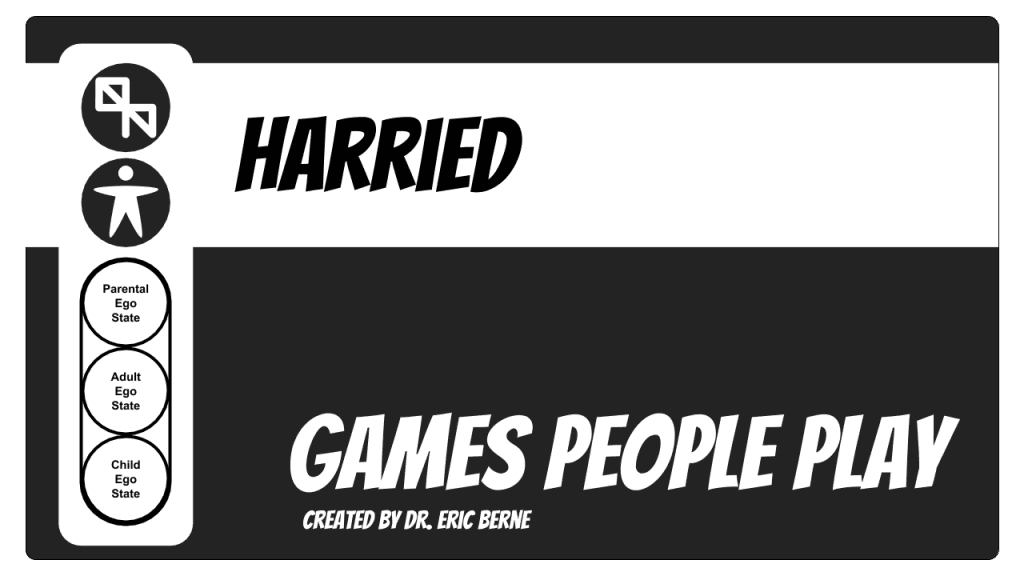 This is a game played by the harried housewife. Her situation requires that she be proficient in ten or twelve different occupations; or, stated otherwise, that she fill gracefully ten or twelve different roles. From time to time semi-facetious lists of these occupations or roles appear in the Sunday supplements: mistress, mother, nurse, housemaid, etc. Since these roles are usually conflicting and fatiguing, their imposition gives rise in the course of years to the condition symbolically known as ‘Housewife’s Knee’ (since the knee is used for rocking, scrubbing, lifting, driving and so forth), whose symptoms are succinctly summarized in the complaint: ‘I’m tired.’

Now, if the housewife is able to set her own pace and find enough satisfaction in loving her husband and children, she will not merely serve but enjoy her twenty-five years, and see the youngest child off to college with a pang of loneliness. But if on the one hand she is driven by her inner Parent and called to account by the critical husband she has chosen for that purpose, and on the other unable to get sufficient satisfaction from loving her family, she may grow more and more unhappy. At first she may try to console herself with the advantages of ‘If It Weren’t For You’ and ‘Blemish’ (and indeed, any housewife may fall back on these when the going gets rough); but soon these fail to keep her going. Then she has to find another way out, and that is the game of ‘Harried’.

The thesis of this game is simple. She takes on everything that comes, and even asks for more. She agrees with her husband’s criticisms and accepts all her children’s demands. If she has to entertain at dinner, she not only feels she must function impeccably as a conversationalist, chatelaine over the household and servants, interior decorator, caterer, glamour girl, virgin queen and diplomat; she will also volunteer that morning to bake a cake and take the children to the dentist. If she already feels harassed, she makes the day even more harried. Then in the middle of the afternoon she justifiably collapses, and nothing gets done. She lets down her husband, the children and their guests, and her self-reproaches add to her misery. After this happens two or three times her marriage is in jeopardy, the children are confused, she loses weight, her hair is untidy, her face is drawn and her shoes are scuffed. Then she appears at the psychiatrist’s office, ready to be hospitalized.

The logical antithesis is simple: Mrs White can fill each of her roles in succession during the week, but she must refuse to play two or more of them simultaneously. When she gives a cocktail party, for example, she can play either caterer or nursemaid, but not both. If she is merely suffering from Housewife’s Knee, she may be able to limit herself in this way.

If she is actually playing a game of ‘Harried’, however, it will be very difficult for her to adhere to this principle. In that case the husband is carefully chosen; he is an otherwise reasonable man who will criticize his wife if she is not as efficient as he thinks his mother was. In effect, she marries his fantasy of his mother as perpetuated in his Parent, which is similar to her fantasy of her mother or grandmother. Having found a suitable partner, her Child can now settle into the harassed role necessary to maintain her psychic balance, and which she will not readily give up. The more occupational responsibility the husband has, the easier it is for both of them to find Adult reasons to preserve the unhealthy aspects of their relationship.

When the position becomes untenable, often because of official school intervention on behalf of the unhappy offspring, the psychiatrist is called in to make it a three-handed game. Either the husband wants him to do an overhaul job on the wife, or the wife wants him as an ally against the husband. The ensuing proceedings depend on the skill and alertness of the psychiatrist. Usually the first phase, the alleviation of the wife’s depression, will proceed smoothly. The second phase, in which she will give up playing ‘Harried’ in favour of playing ‘Psychiatry’, is the decisive one. It tends to arouse increasing opposition from both spouses. Sometimes this is well concealed and then explodes suddenly, though not unexpectedly. If this stage is weathered, then the real work of game analysis can proceed.

It is necessary to recognize that the real culprit is the wife’s Parent, her mother or grandmother; the husband is to some extent only a lay figure chosen to play his role in the game. The therapist has to fight not only this Parent and the husband, who has a heavy investment in playing his end, but also the social environment, which encourages the wife’s compliance. The week after the article appears about the many roles a housewife has to play, there is a How’m I Doing? in the Sunday paper: a ten-item test to determine ‘How Good A Hostess (Wife) (Mother) (Housekeeper) (Budgeteer) Are You?’ For the housewife who plays ‘Harried’, that is the equivalent of the little leaflet that comes with children’s games, stating the rules. It may help to speed up the evolution of ‘Harried’, which, if not checked, may end in a game of ‘State Hospital’ (‘The last thing I want is to be sent to a hospital’).

One practical difficulty with such couples is that the husband tends to avoid personal involvement with the treatment beyond playing ‘Look How Hard I’m Trying’, because he is usually more disturbed than he cares to admit. Instead he may send indirect messages to the therapist, through temper outbursts which he knows will be reported by the wife. Hence ‘Harried’ easily progresses to a third-degree life-death-divorce struggle. The psychiatrist is almost alone on the side of life, assisted only by the harried Adult of the patient which is locked in combat that may prove mortal against all three aspects of the husband, allied with her own inner Parent and Child. It is a dramatic battle, with odds of two against five, which tries the skill of the most game-free and professional therapist. If he quails, he can take the easy way out and offer his patient on the altar of the divorce court, which is equivalent to saying ‘I surrender—Let’s you and him fight.’