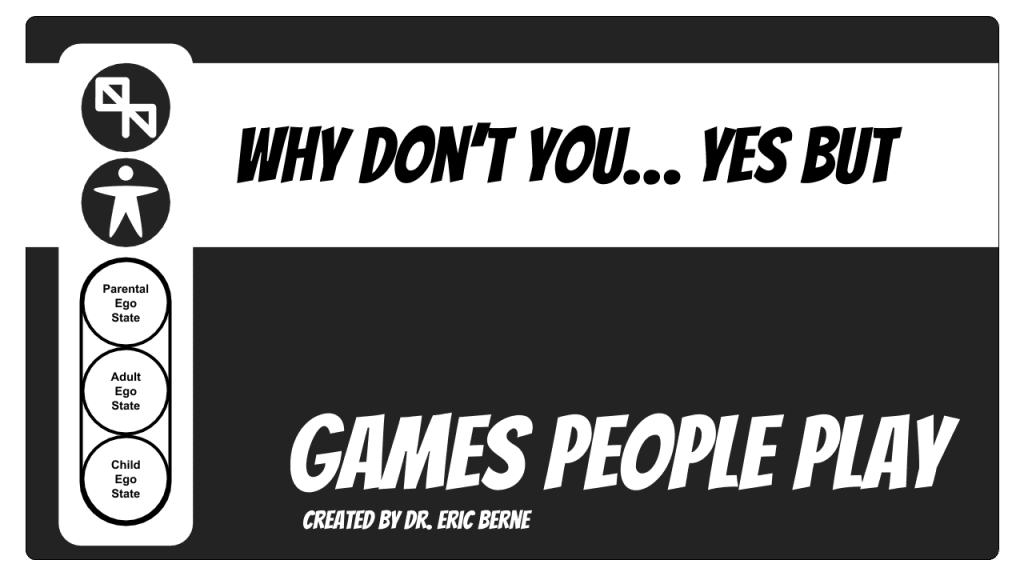 ‘Why Don’t You—Yes But’ occupies a special place in game analysis, because it was the original stimulus for the concept of games. It was the first game to be dissected out of its social context, and since it is the oldest subject of game analysis, it is one of the best understood. It is also the game most commonly played at parties and in groups of all kinds, including psychotherapy groups. The following example will serve to illustrate its main characteristics:

White: ‘My husband always insists on doing our own repairs, and he never builds anything right.’

Black: ‘Why doesn’t he take a course in carpentry?’

Blue: ‘Why don’t you buy him some good tools?’

White: ‘Yes, but he doesn’t know how to use them.’

Red: ‘Why don’t you have your building done by a carpenter?’

White: ‘Yes, but that would cost too much.’

Brown: ‘Why don’t you just accept what he does the way he does it?’

White: ‘Yes, but the whole thing might fall down.’

Such an exchange is typically followed by a silence. It is eventually broken by Green, who may say something like, ‘That’s men for you, aways trying to show how efficient they are.’

YDYB can be played by any number. The agent presents a problem. The others start to present solutions, each beginning with ‘Why don’t you…?’ To each of these White objects with a ‘Yes, but…’ A good player can stand off the others indefinitely until they all give up, whereupon White wins. In many situations she might have to handle a dozen or more solutions to engineer the crestfallen silence which signifies her victory, and which leaves the field open for the next game in the above paradigm, Green switching into ‘PTA’, Delinquent Husband Type.

Since the solutions are, with rare exceptions, rejected, it is apparent that this game must serve some ulterior purpose. YDYB is not played for its ostensible purpose (an Adult quest for information or solutions), but to reassure and gratify the Child. A bare transcript may sound Adult, but in the living tissue it can be observed that White presents herself as a Child inadequate to meet the situation; whereupon the others become transformed into sage Parents anxious to dispense their wisdom for her benefit.

Figure 8. Why Don’t You—Yes But

This is illustrated in Figure 8. The game can proceed because at the social level both stimulus and response are Adult to Adult, and at the psychological level they are also complementary, with Parent to Child stimulus (‘Why don’t you…’) eliciting Child to Parent response (‘Yes, but…’). The psychological level is usually unconscious on both sides, but the shifts in ego state (Adult to ‘inadequate’ Child on White’s part, Adult to ‘wise’ Parent by the others) can often be detected by an alert observer from changes in posture, muscular tone, voice and vocabulary.

In order to illustrate the implications, it is instructive to follow through on the example given above.

Therapist: ‘Did anyone suggest anything you hadn’t thought of yourself?’

White: ‘No, they didn’t. As a matter of fact, I’ve actually tried almost everything they suggested. I did buy my husband some tools, and he did take a course in carpentry.’

Here White demonstrates two of the reasons why the proceedings should not be taken at face value. First, in the majority of cases White is as intelligent as anyone else in the company, and it is very unlikely that others will suggest any solution that she has not thought of herself. If someone does happen to come up with an original suggestion, White will accept it gratefully if she is playing fair; that is, her ‘inadequate’ Child will give way if anyone present has an idea ingenious enough to stimulate her Adult. But habitual YDYB players, such as White above, seldom play fair. On the other hand, a too ready acceptance of suggestions raises the question of whether the YDYB is not masking an underlying game of ‘Stupid’.

The example given is particularly dramatic, because it clearly illustrates the second point. Even if White has actually tried some of the solutions presented, she will still object to them. The purpose of the game is not to get suggestions, but to reject them.

While almost anyone will play this game under proper circumstances because of its time-structuring value, careful study of individuals who particularly favour it reveals several interesting features. First, they characteristically can and will play either side of the game with equal facility. This switchability of roles is true of all games. Players may habitually prefer one role to another, but they are capable of trading, and they are willing to play any other role in the same game if for some reason that is indicated. (Compare, for example, the switch from Drinker to Rescuer in the game of ‘Alcoholic’.)

Second, in clinical practice it is found that people who favour YDYB belong to that class of patients who eventually request hypnosis or some sort of hypnotic injection as a method of speeding up their treatment. When they are playing the game, their object is to demonstrate that no one can give them an acceptable suggestion—that is, they will never surrender; whereas with the therapist, they request a procedure which will put them in a state of complete surrender. It is thus apparent that YDYB represents a social solution to a conflict about surrender.

Even more specifically, this game is common among people who have a fear of blushing, as the following therapeutic exchange demonstrates:

White: ‘If I’m talking to somebody I have to keep thinking of things to say. If I don’t, I’ll blush. Except in the dark. I can’t stand a lull. I know it, and my husband knows it, too. He’s always told me that.’

Therapist: ‘You mean if your Adult doesn’t keep busy, your Child takes the chance to pop up and make you feel embarrassed?’

Here White indicates clearly that she fears unstructured time. Her Child is prevented from advertising as long as the Adult can be kept busy in a social situation, and a game offers a suitable structure for Adult functioning. But the game must be suitably motivated in order to maintain her interest. Her choice of YDYB is influenced by the principle of economy: it yields the maximum internal and external advantages to her Child’s conflicts about physical passivity. She could play with equal zest either the shrewd Child who cannot be dominated or the sage Parent who tries to dominate the Child in someone else, but fails. Since the basic principle of YDYB is that no suggestion is ever accepted, the Parent is never successful. The motto of the game is: ‘Don’t get panicky, the Parent never succeeds.’

In summary, then: while each move is amusing, so to speak, to White, and brings its own little pleasure in rejecting the suggestion, the real payoff is the silence or masked silence which ensues when all the others have racked their brains and grown tired of trying to think of acceptable solutions. This signifies to White and to them that she has won by demonstrating it is they who are inadequate. If the silence is not masked, it may persist for several minutes. In the paradigm, Green cut White’s triumph short because of her eagerness to start a game of her own, and that was what kept her from participating in White’s game. Later on in the session, White demonstrated her resentment against Green for having abridged her moment of victory.

Another curious feature of YDYB is that the external and internal games are played exactly the same way, with the roles reversed. In the external form, the one observed clinically, White’s Child comes out to play the role of the inadequate help-seeker in a many-handed situation. In the internal form, the more intimate two-handed game played at home with her husband, her Parent comes out as the wise, efficient suggestion-giver. This reversal is usually secondary, however, since during the courtship she plays the helpless Child side, and only after the honeymoon is over does her bossy Parent begin to emerge into the open. There may have been slips as the wedding approached, but her fiancé will overlook these in his eagerness to settle down with his carefully chosen bride. If he does not overlook them, the engagement may be called off for ‘good reasons’, and White, sadder but no wiser, will resume her search for a suitable mate.

It is evident that those who respond to White’s first move, the presentation of her ‘problem’, are playing a form of ‘I’m Only Trying to Help You’ (ITHY). In fact YDYB is the inverse of ITHY. In ITHY there is one therapist and many clients; in YDYB one client and many ‘therapists’. The clinical antithesis to YDYB, therefore, is not to play ITHY. If the opening is of the form: ‘What do you do if…’ (WYDI), a suggested response is: ‘That is a difficult problem. What are you going to do about it?’ If it is of the form: ‘X didn’t work out properly’, the response then should be ‘That is too bad.’ Both of these are polite enough to leave White at a loss, or at least to elicit a crossed transaction, so that his frustration becomes manifest and can then be explored. In a therapy group it is good practice for susceptible patients to refrain from playing ITHY when invited. Then not only White, but the other members as well, can learn from anti-YDYB, which is merely the other side of anti-ITHY.

In a social situation, if the game is friendly and harmless, there is no reason not to participate. If it is an attempt to exploit professional knowledge, an antithetical move may be required; but in such situations this arouses resentment because of the exposure of White’s Child. The best policy under those circumstances is to flee from the opening move and look for a stimulating game of first-degree ‘Rapo’.

‘Why Don’t You—Yes But’ must be distinguished from its obverse, ‘Why Did You—No But’ (YDNB), in which it is the Parent who wins and the defensive Child who eventually retires in confusion, although again the bare transcript may sound factual, rational and Adult to Adult. YDNB is closely related to ‘Furthermore’.

The reverse of YDYB at first resembles ‘Peasant’. Here White seduces the therapist into giving her suggestions which she immediately accepts, rather than rejects. Only after he is deeply involved does he perceive that White is turning on him. What looked like ‘Peasant’ ends up as a game of intellectual ‘Rapo’. The classical version of this is the switch from positive to negative transference in the course of orthodox psychoanalysis.

YDYB may also be played in a second-degree hard form as ‘Do Me Something’. The patient refuses to do the housework, for example, and there is a game of YDYB every evening, when the husband returns home. But no matter what he says, she sullenly refuses to change her ways. In some cases the sullenness may be malignant and require careful psychiatric evaluation. The game aspect must be considered as well, however, since it raises the question of why the husband selected such a spouse, and how he contributes to maintaining the situation.

Parent: ‘I can make you grateful for my help.’