See What You Made Me Do 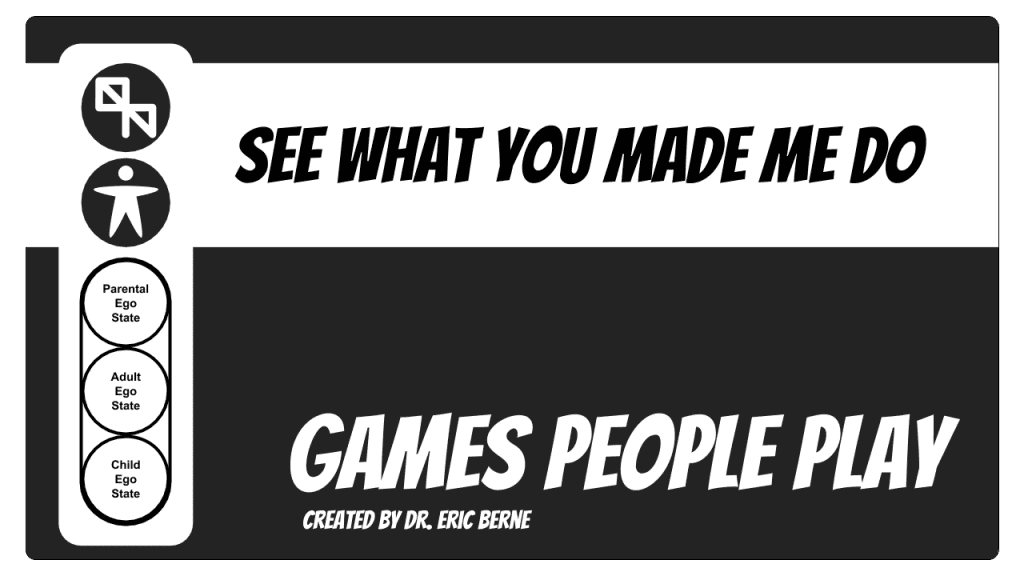 In its classical form this is a marital game, and in fact is a ‘three-star marriage buster’, but it may also be played between parents and children and in working life.

‘See What You Made Me Do.’ (SWYMD) and ‘You Got Me into This’ (UGMIT) complement each other nicely, so that the SWYMD-UGMIT combination is a classical basis for the cover game contract in many marriages. This contract is illustrated by the following sequence.

By mutual agreement Mrs White did the family bookkeeping and paid the bills out of the joint checking account because Mr White was ‘poor at figures’. Every few months they would be notified of an overdraft, and Mr White would have to square it with the bank. When they looked for the source of the difficulty, it would turn out that Mrs White had made an expensive purchase without telling her husband. When this came to light, Mr White would furiously play his UGMIT, and she would tearfully accept his rebuke and promise it would not happen again. Everything would go smoothly for a while, and then a creditor’s agent would suddenly appear to demand payment for a long-overdue bill. Mr White, not having heard of this bill, would question his wife about it. She would then play her SWYMD, saying that it was his fault. Since he had forbidden her to overdraw their account, the only way she could make ends meet was by leaving this large obligation unpaid and hiding the duns from him.

These games had been allowed to go on for ten years, on the basis that each occurrence would be the last, and that from then on it would be different—which it was, for a few months. In therapy Mr White very cleverly analysed this game without any assistance from the therapist, and also devised an effective remedy. By mutual agreement he and Mrs White put all charge accounts and their bank account in his name. Mrs White continued to do the bookkeeping and make out the checks, but Mr White saw the bills first and controlled the outgoing payments. In this way neither duns nor overdrafts could get by him, and they now shared the budgetary labour. Deprived of the satisfactions and advantages of SWYMD-UGMIT, the Whites were at first at a loss, and were then driven to find more open and constructive types of gratification from each other.