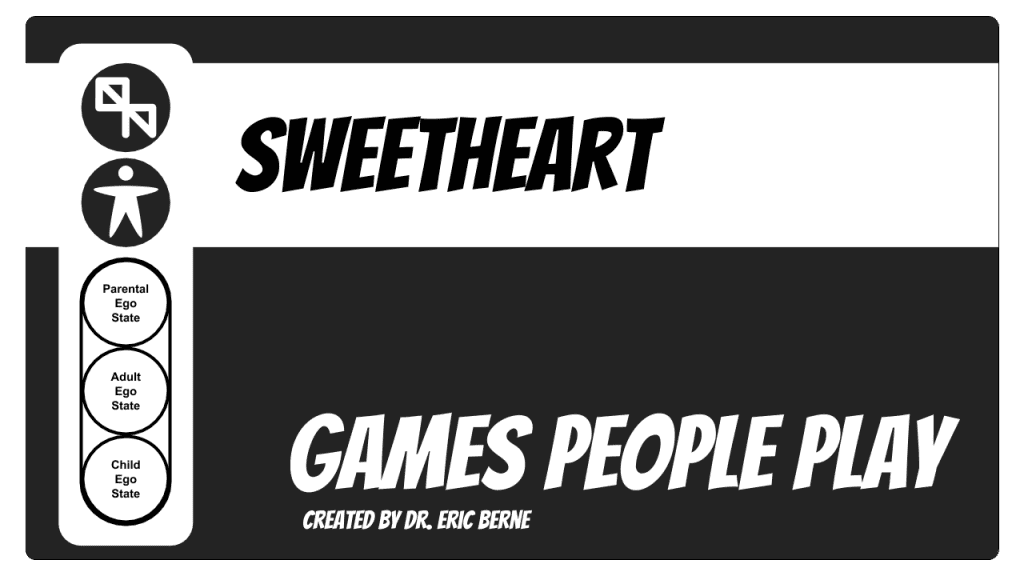 This is seen in its fullest flower in the early stages of marital group therapy, when the parties feel defensive; it can also be observed on social occasions. White makes a subtly derogatory remark about Mrs White, disguised as an anecdote, and ends: ‘Isn’t that right, sweetheart?’ Mrs White tends to agree for two ostensibly Adult reasons: (a) because the anecdote itself is in the main, accurately reported, and to disagree about what is presented as a peripheral detail (but is really the essential point of the transaction) would seem pedantic; (b) because it would seem surly to disagree with a man who calls one ‘sweetheart’ in public. The psychological reason for her agreement, however, is her depressive position. She married him precisely because she knew he would perform this service for her: exposing her deficiencies and thus saving her from the embarrassment of having to expose them herself. Her parents accommodated her the same way when she was little.

Next to ‘Courtroom’, this is the most common game played in marital groups. The more tense the situation, and the closer the game is to exposure, the more bitterly is the word ‘sweetheart’ enunciated, until the underlying resentment becomes obvious. On careful consideration it can be seen that this is a relative of ‘Schlemiel’, since the significant move is Mrs White’s implicit forgiveness for White’s resentment, of which she is trying hard not to be aware. Hence anti-‘Sweetheart’ is played analogously to anti-‘Schlemiel’: ‘You can tell derogatory anecdotes about me, but please don’t call me “sweetheart”.’ This antithesis carries with it the same perils as does anti-‘Schlemiel’. A more sophisticated and less dangerous antithesis is to reply: ‘Yes, honey!’

In another form the wife, instead of agreeing, responds with a similar ‘Sweetheart’ type anecdote about the husband, saying in effect, ‘You have a dirty face too, dear.’

Sometimes the endearments are not actually pronounced, but a careful listener can hear them even when they are unspoken. This is ‘Sweetheart’, Silent Type.