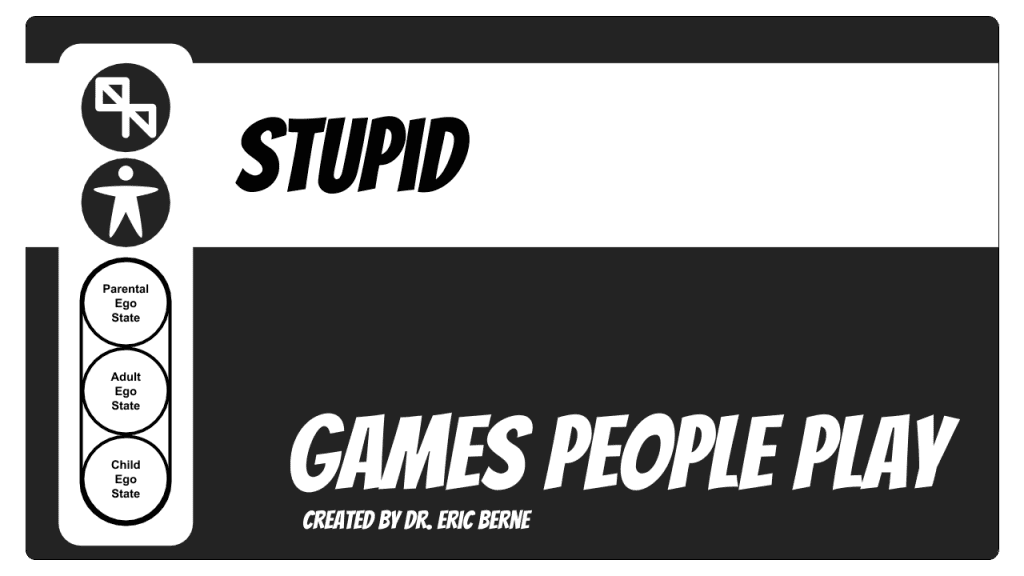 In its milder form, the thesis of ‘Stupid’ is, ‘I laugh with you at my own clumsiness and stupidity.’ Seriously disturbed people, however, may play it in a sullen way which says, ‘I am stupid, that’s the way I am, so do me something.’ Both forms are played from a depressive position. ‘Stupid’ must be distinguished from ‘Schlemiel’, where the position is more aggressive, and the clumsiness is a bid for forgiveness. It must also be distinguished from ‘Clown’, which is not a game but a pastime which reinforces the position ‘I am cute and harmless.’ The critical transaction in ‘Stupid’ is for White to make Black call him stupid or respond as though he were stupid. Hence White acts like a Schlemiel but does not ask for forgiveness; in fact forgiveness makes him uneasy, because it threatens his position. Or he behaves clownishly, but with no implication that he is kidding; he wants his behaviour to be taken seriously, as evidence of real stupidity. There is considerable external gain, since the less White learns, the more effectively he can play. Hence at school he need not study, and at work he need not go out of his way to learn anything that might lead to advancement. He has known from an early age that everyone will be satisfied with him as long as he is stupid, despite any expressions to the contrary. People are surprised when in time of stress, if he decides to come through, it turns out that he is not stupid at all—any more than is the ‘stupid’ younger son in the fairy tale.

The antithesis of the milder form is simple. By not playing, by not laughing at the clumsiness or railing at the stupidity, the anti-‘Stupid’ player will make a friend for life. One of the subtleties is that this game is often played by cyclothymic or manic-depressive personalities. When such people are euphoric, it seems as though they really want their associates to join in their laughter at themselves. It is often hard not to, for they give the impression that they will resent an abstainer—which in a way they do, since he threatens their position and spoils the game. But when they are depressed, and their resentment against those who laughed with or at them comes into the open, the abstainer knows that he has acted correctly. He may be the only one the patient is willing to have in the room or talk to when he is withdrawn, and all the former ‘friends’ who enjoyed the game are now treated as enemies.

It is no use telling White that he is not really stupid. He may actually be of quite limited intelligence and well aware of it, which is how the game got started in the first place. There may be special areas, however, in which he is superior: often psychological insight is one. It does no harm to show whatever respect is deserved for such aptitudes, but this is different from clumsy attempts at ‘reassurance’. The latter may give him the bitter satisfaction of realizing that other people are even more stupid than he, but this is small consolation. Such ‘reassurance’ is certainly not the most intelligent therapeutic procedure; usually it is a move in a game of ‘I’m Only Trying to Help You’. The antithesis of ‘Stupid’ is not to substitute another game, but simply to refrain from playing ‘Stupid’.

The antithesis of the sullen form is a more complicated problem, because the sullen player is trying to provoke not laughter or derision but helplessness or exasperation, which he is well equipped to handle in accordance with his challenge. ‘So do me something.’ Thus he wins either way. If Black does nothing, it is because he feels helpless, and if he does something, it is because he is exasperated. Hence these people are prone also to play ‘Why Don’t You—Yes But’, from which they can get the same satisfactions in milder form. There is no easy solution in this case, nor is there likely to be one forthcoming until the psychodynamics of this game are more clearly understood.