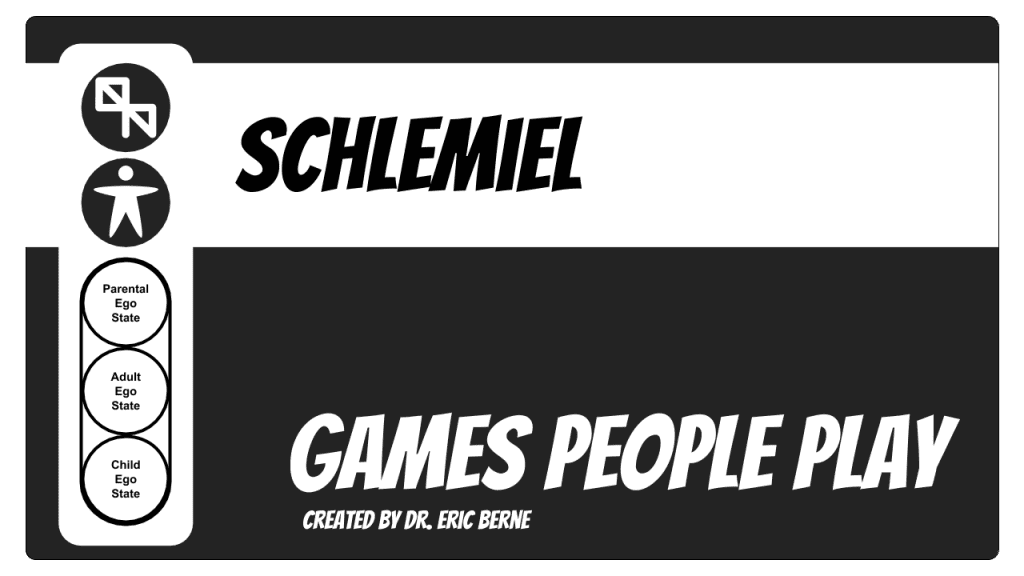 The term ‘schlemiel’ does not refer to the hero of Chamisso’s novel, who was a man without a shadow, but to a popular Yiddish word allied to the German and Dutch words for cunning. The Schlemiel’s victim, who is something like the ‘Good-Natured Fellow’ of Paul de Kock, is colloquially called the Schlemazl. The moves in a typical game of ‘Schlemiel’ are as follows:

1W. White spills a highball on the hostess’s evening gown.

1B. Black (the host) responds initially with rage, but he senses (often only vaguely) that if he shows it, White wins. Black therefore pulls himself together, and this gives him the illusion that he wins.

2B. Black mutters or cries forgiveness, strengthening his illusion that he wins.

3W. White then proceeds to inflict other damage on Black’s property. He breaks things, spills things and makes messes of various kinds. After the cigarette burn in the tablecloth, the chair leg through the lace curtain and the gravy on the rug, White’s Child is exhilarated because he has enjoyed himself in carrying out these procedures, for all of which he has been forgiven, while Black has made a gratifying display of suffering self-control. Thus both of them profit from an unfortunate situation, and Black is not necessarily anxious to terminate the friendship.

As in most games, White, who makes the first move, wins either way. If Black shows his anger, White can feel justified in returning the resentment. If Black restrains himself, White can go on enjoying his opportunities. The real payoff in this game, however, is not the pleasure of destructiveness, which is merely an added bonus for White, but the fact that he obtains forgiveness.* This leads directly into the antithesis.

Anti-‘Schlemiel’ is played by not offering the demanded absolution. After White says ‘I’m sorry’, Black, instead of muttering ‘It’s okay’, says, ‘Tonight you can embarrass my wife, ruin the furniture and wreck the rug, but please don’t say “I’m sorry”.’ Here Black switches from being a forgiving Parent to being an objective Adult who takes the full responsibility for having invited White in the first place.

The intensity of White’s game will be revealed by his reaction, which may be quite explosive. One who plays anti-‘Schlemiel’ runs the risk of immediate reprisals or, at any rate, of making an enemy.

Children play ‘Schlemiel’ in an abortive form in which they are not always sure of forgiveness but at least have the pleasure of making messes; as they learn to comport themselves socially, however, they may take advantage of their increasing sophistication to obtain the forgiveness which is the chief goal of the game as played in polite, grown-up social circles.

Child: ‘You have to forgive things which appear accidental.’

Parent: ‘You are right. I have to show you what good manners are.’

Adult: ‘Since I’m polite, you have to be polite, too.’