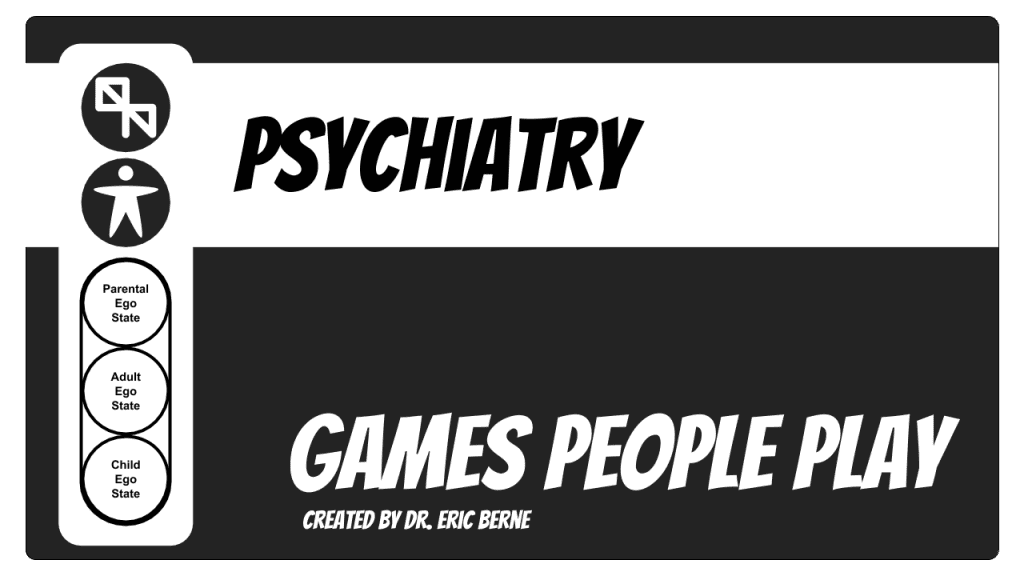 Psychiatry as a procedure must be distinguished from ‘Psychiatry’ as a game. According to the available evidence, presented in proper clinical form in scientific publications, the following approaches, among others, are of value in treating psychiatric conditions: shock therapy, hypnosis, drugs, psychoanalysis, orthopsychiatry and group therapy. There are others which are less commonly used and will not be discussed here. Any of these can be used in the game of ‘Psychiatry’, which is based on the position ‘I am a healer’, supported by a diploma: ‘It says here I am a healer’. It will be noted that in any case this is a constructive, benevolent position, and that people who play ‘Psychiatry’ can do a great deal of good, providing they are professionally trained.

It is likely, however, that there will be some gain in therapeutic results if therapeutic ardour is moderated. The antithesis was best expressed long ago by Ambroise Paré, who said in effect: ‘I treat them, but God cures them.’ Every medical student learns about this dictum, along with others such as primum non nocere, and phrases such as vis medicatrix naturae. Nonmedical therapists, however, are not so likely to be exposed to these ancient cautions. The position ‘I am a healer because it says here that I am a healer’ is likely to be an impairment, and may be replaced to advantage with something like: ‘I will apply what therapeutic procedures I have learned in the hope that they will be of some benefit.’ This avoids the possibility of games based on: ‘Since I am a healer, if you don’t get better it’s your fault’ (e.g., ‘I’m Only Trying To Help You’), or ‘Since you’re a healer, I’ll get better for you’ (e.g., ‘Peasant’). All of this, of course, is known in principle to every conscientious therapist. Certainly every therapist who has ever presented a case at a reputable clinic has been made aware of it. Conversely, a good clinic may be defined as one which makes its therapists aware of these things.

On the other side, the game of ‘Psychiatry’ is more apt to crop up with patients who have previously been treated by less competent therapists. A few patients, for example, carefully pick weak psychoanalysts, moving from one to another, demonstrating that they cannot be cured and meanwhile learning to play a sharper and sharper game of ‘Psychiatry’; eventually it becomes difficult for even a first-rate clinician to separate the wheat from the chaff. The duplex transaction on the patient’s side is:

Child: ‘You will never cure me, but you will teach me to be a better neurotic (play a better game of “Psychiatry”).’

‘Mental Health’ is played similarly; here the Adult statement is, ‘Everything will get better if I apply the principles of mental health which I have read and heard about.’ One patient learned to play ‘Psychiatry’ from one therapist, ‘Mental Health’ from another, and then as a result of still another effort began to play a pretty good game of ‘Transactional Analysis’. When this was frankly discussed with her, she agreed to stop playing ‘Mental Health’, but requested that she be allowed to continue to play ‘Psychiatry’ because it made her feel comfortable. The transactional psychiatrist agreed. She continued therefore for several months to recite her dreams and her interpretations of them at weekly intervals. Finally, partly out of plain gratitude, perhaps, she decided that it might be interesting to find out what was really the matter with her. She became seriously interested in transactional analysis, with good results.

A variant of ‘Psychiatry’ is ‘Archaeology’ (title by courtesy of Dr Norman Reider of San Francisco), in which the patient takes the position that if she can only find out who had the button, so to speak, everything will suddenly be all right. This results in a continual rumination over childhood happenings. Sometimes the therapist may be beguiled into a game of ‘Critique’, in which the patient describes her feelings in various situations and the therapist tells her what is wrong with them. ‘Self-Expression’, which is a common game in some therapy groups, is based on the dogma ‘Feelings are Good’. A patient who uses vulgar expletives, for example, may be applauded or at least implicitly lauded. A sophisticated group, however, will soon spot this as a game.

Some members of therapy groups become quite adept at picking out games of ‘Psychiatry’, and will soon let a new patient know if they think he is playing ‘Psychiatry’ or ‘Transactional Analysis’ instead of using group procedures to obtain legitimate insight. A woman who transferred from a Self-Expression group in one city to a more sophisticated group in another city told a story about an incestuous relationship in her childhood. Instead of the awe which she had come to expect whenever she told this oft-repeated tale, she was greeted with indifference, whereupon she became enraged. She was astonished to discover that the new group was more interested in her transactional anger than in her historical incest, and in irate tones she hurled what apparently in her mind was the ultimate insult: she accused them of not being Freudian. Freud himself, of course, took psychoanalysis more seriously, and avoided making a game of it by saying that he himself was not a Freudian.

Recently unmasked is a new variant of ‘Psychiatry’ called ‘Tell Me This’, somewhat similar to the party pastime ‘Twenty Questions’. White relates a dream or an incident, and the other members, often including the therapist, then attempt to interpret it by asking pertinent questions. As long as White answers the questions, each member continues his inquiries until he finds a question White cannot answer. Then Black sits back with a knowing look which says: ‘Aha! If you could answer that one, you would certainly get better, so I have done my part.’ (This is a distant relative of ‘Why Don’t You—Yes But’.) Some therapy groups are based almost entirely on this game, and may go on for years with only minimal change or progress. ‘Tell Me This’ allows much latitude to White (the patient) who, for example, can play along with it by feeling ineffectual; or he can counter it by answering all the questions offered, in which case the anger and dismay of the other players soon becomes manifest, since he is throwing back at them, ‘I’ve answered all your questions and you haven’t cured me, so what does that make you?’

‘Tell Me This’ is also played in schoolrooms, where the pupils know that the ‘right’ answer to an open-ended question asked by a certain type of teacher is not to be found by processing the factual data, but by guessing or outguessing which of several possible answers will make the teacher happy. A pedantic variant occurs in teaching ancient Greek; the teacher always has the upper hand over the pupil, and can make him look stupid and prove it in print by pointing to some obscure feature of the text. This is also often played in teaching Hebrew.