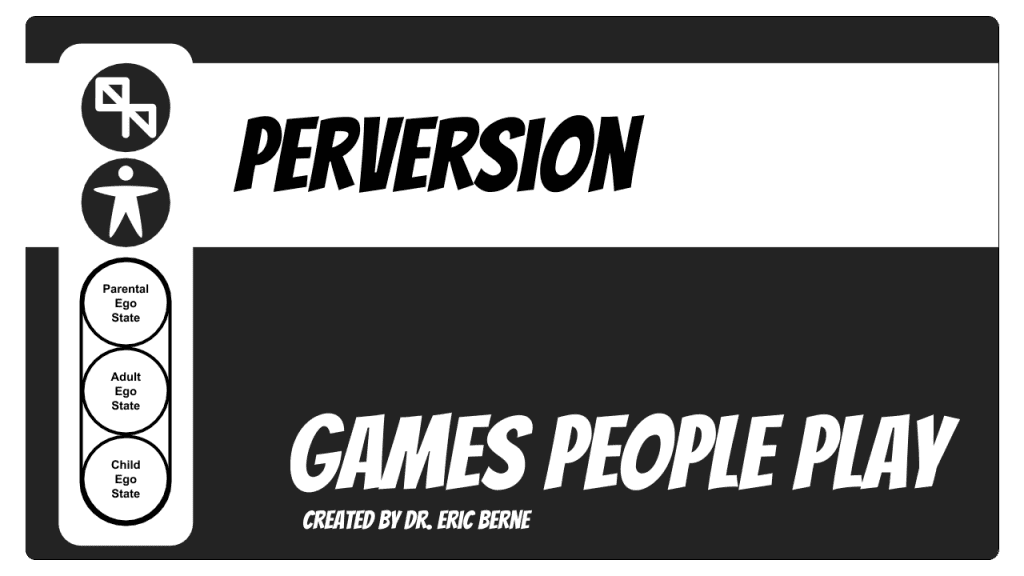 Heterosexual perversions such as fetishism, sadism and masochism are symptomatic of a confused Child and are treated accordingly. Their transactional aspects, however, as manifested in actual sexual situations, can be dealt with by means of game analysis. This may lead to social control, so that even if the warped sexual impulses remain unchanged, they are neutralized as far as actual indulgence is concerned.

People who are suffering from mild sadistic or masochistic distortions tend to take a primitive kind of ‘Mental Health’ position. They feel that they are strongly sexed, and that prolonged abstinence will lead to serious consequences. Neither of these conclusions is necessarily true, but they form the basis for a game of ‘Wooden Leg’ with the plea: ‘What do you expect from someone as strongly sexed as I am?’

To extend ordinary courtesy to oneself and one’s partner; that is, to refrain from verbal or physical flagellation and confine oneself to more conventional forms of coitus. If White is a true pervert, this will lay bare the second element of the game, which is often clearly expressed in his dreams: that coitus itself has little interest for him, and that his real satisfaction is derived from the humiliating foreplay. This is something that he may not have cared to admit to himself. But it will now become clear to him that his complaint is: ‘After all this work, I have to have intercourse, yet!’ At this point the position is much more favourable for specific psychotherapy, and much of the pleading and evasiveness has been nullified. This applies to ordinary ‘sexual psychopaths’ as seen in practice, and not to malignant schizophrenic or criminal perversions, nor to those who confine their sexual activities to fantasy.

The game of ‘Homosexuality’ has become elaborated into a subculture in many countries, just as it is ritualized in others. Many of the disabilities which result from homosexuality arise from making it into a game. The provocative behaviour which gives rise to ‘Cops and Robbers’, ‘Why Does This Always Happen to Us’, ‘It’s the Society We Live In’, ‘All Great Men Were’ and so forth, is often amenable to social control, which reduces the handicaps to a minimum. The ‘professional homosexual’ wastes a large amount of time and energy which could be applied to other ends. Analysis of his games may help him establish a quiet ménage which will leave him free to enjoy the benefits that bourgeois society offers, instead of devoting himself to playing his own variation of ‘Ain’t It Awful’.