I'm Only Trying to Help You 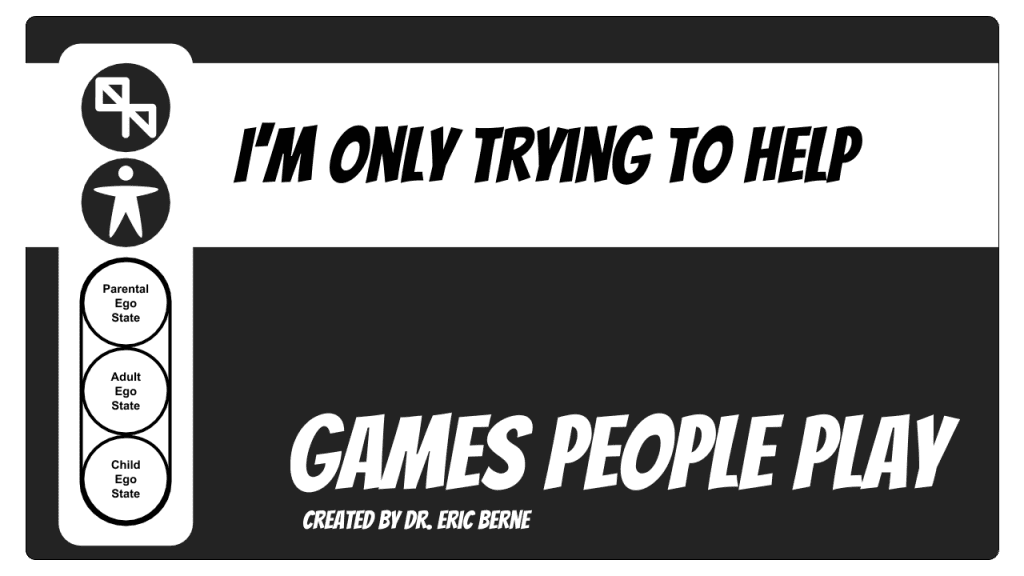 This game may be played in any professional situation and is not confined to psychotherapists and welfare workers. However, it is found most commonly and in its most florid form among social workers with a certain type of training. The analysis of this game was clarified for the writer under curious circumstances. All the players at a poker game had folded except two, a research psychologist and a businessman. The businessman, who had a high hand, bet; the psychologist, who had an unbeatable one, raised. The businessman looked puzzled, whereupon the psychologist remarked facetiously: ‘Don’t be upset, I’m only trying to help you!’ The businessman hesitated, and finally put in his chips. The psychologist showed the winning hand, whereupon the other threw down his cards in disgust. The others present then felt free to laugh at the psychologist’s joke, and the loser remarked ruefully: ‘You sure were helpful!’ The psychologist cast a knowing glance at the writer, implying that the joke had really been made at the expense of the psychiatric profession. It was at that moment that the structure of this game became clear.

The worker or therapist, of whatever profession, gives some advice to a client or patient. The patient returns and reports that the suggestion did not have the desired effect. The worker shrugs off this failure with a feeling of resignation, and tries again. If he is more watchful, he may detect at this point a twinge of frustration, but he will try again anyway. Usually he feels little need to question his own motives, because he knows that many of his similarly trained colleagues do the same thing, and that he is following the ‘correct’ procedure and will receive full support from his supervisors.

If he runs up against a hard player, such as a hostile obsessional, he will find it more and more difficult to avoid feeling inadequate. Then he is in trouble, and the situation will slowly deteriorate. In the worst case, he may come up against an angry paranoid who will rush in one day in a rage, crying:‘Look what you made me do!’ Then his frustration will come strongly to the fore in the spoken or unspoken thought: ‘But I was only trying to help you!’ His bewilderment at the ingratitude may cause him considerable suffering, indicating the complex motives underlying his own behaviour. This bewilderment is the payoff.

Legitimate helpers should not be confused with people who play ‘I’m Only Trying to Help You’ (ITHY). ‘I think we can do something about it’, ‘I know what to do’, ‘I was assigned to help you’ or ‘My fee for helping you will be..’ are different from ‘I’m only trying to help you’. The first four, in good faith, represent Adult offers to put professional qualifications at the disposal of the distressed patient or client; ITHY has an ulterior motive which is more important than professional skill in determining the out come. This motive is based on the position that people are ungrateful and disappointing. The prospect of success is alarming to the Parent of the professional and is an invitation to sabotage, because success would threaten the position. The ITHY player needs to be reassured that help will not be accepted no matter how strenuously it is offered. The client responds with ‘Look How Hard I’m Trying’ or ‘There’s Nothing You Can Do to Help Me’. More flexible players can compromise: it is all right for people to accept help providing it takes them a long time to do so. Hence therapists tend to feel apologetic for a quick result, since they know that some of their colleagues at staff meetings will be critical. At the opposite pole from hard ITHY players, such as are found among social workers, are good lawyers who help their clients without personal involvement or sentimentality. Here craftsmanship takes the place of covert strenuousness.

Some schools of social work seem to be primarily academies for the training of professional ITHY players, and it is not easy for their graduates to desist from playing it. An example which may help to illustrate some of the foregoing points will be found in the description of the complementary game ‘Indigence’.

ITHY and its variants are easy to find in everyday life. It is played by family friends and relatives (e.g., ‘I Can Get It For You Wholesale’), and by adults who do community work with children. It is a favourite among parents, and the complementary game played by the offspring is usually ‘Look What You Made Me Do’. Socially it may be a variant of ‘Schlemiel’ in which the damage is done while being helpful rather than impulsively; here the client is represented by a victim who may be playing ‘Why Does This Always Happen To Me?’ or one of its variants.

There are several devices available for the professional to handle an invitation to play this game, and his selection will depend on the state of the relationship between himself and the patient, particularly on the attitude of the patient’s Child.

For the patient, on the other hand, the antithesis is, ‘Don’t tell me what to do to help myself, I’ll tell you what to do to help me.’ If the therapist is known to be a Schlemiel, the correct antithesis for the patient to use is, ‘Don’t help me, help him.’ But serious players of ‘I’m Only Trying to Help You’ are generally lacking in a sense of humour. Antithetical moves on the part of a patient are usually unfavourably received, and may result in the therapist’s lifelong enmity. In everyday life such moves should not be initiated unless one is prepared to carry them through ruthlessly and take the consequences. For example, spurning a relative who ‘Can Get It For You Wholesale’ may cause serious domestic complications.

Parent: ‘See how adequate I am.’