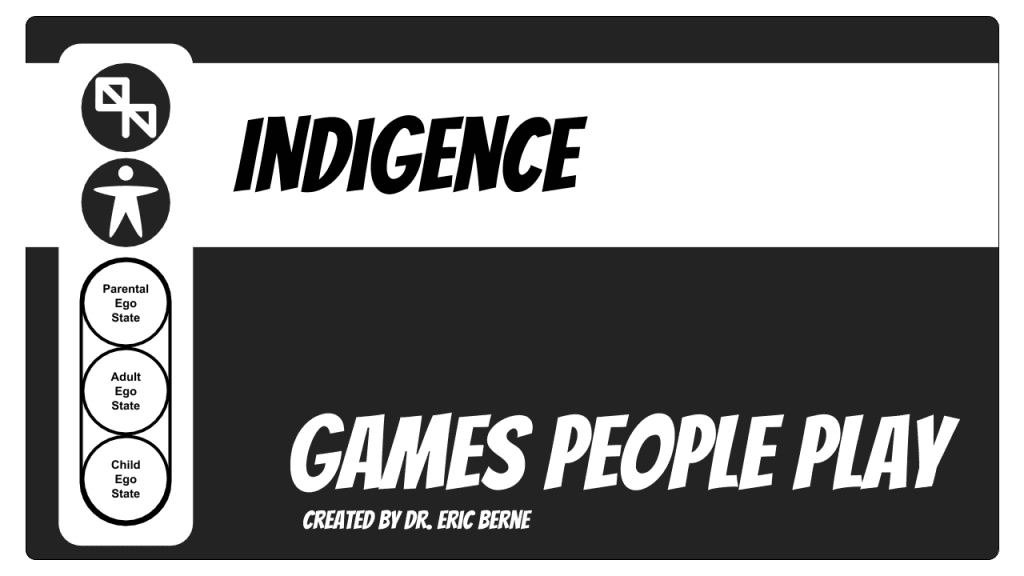 This game is one of the complements of ‘I’m Only Trying to Help You’ (ITHY) as it is played by social workers who earn their living by it. ‘Indigence’ is played just as professionally by the client who earns his living in this manner. The writer’s own experience with ‘Indigence’ is limited, but the following account by one of his most accomplished students illustrates the nature of this game and its place in our society.

Miss Black was a social worker in a welfare agency whose avowed purpose, for which it received a government subsidy, was the economic rehabilitation of indigents—which in effect meant getting them to find and retain gainful employment. The clients of this agency were continually ‘making progress’, according to official reports, but very few of them were actually ‘rehabilitated’. This was understandable, it was claimed, because most of them had been welfare clients for several years, going from agency to agency and sometimes being involved with five or six agencies at a time, so that it was evident that they were ‘difficult cases’.

Miss Black, from her training in game analysis, soon realized that the staff of her agency was playing a consistent game of ITH Y, and wondered how the clients were responding to this. In order to check, she asked her own clients from week to week how many job opportunities they had actually investigated. She was interested to discover that although they were theoretically supposed to be looking assiduously for work from day to day, actually they devoted very little effort to this, and sometimes the token efforts they did make had an ironic quality. For example, one man said that he answered at least one advertisement a day looking for work. ‘What kind of work?’ she inquired. He said he wanted to go into saleswork. ‘Is that the only kind of ad you answer?’ she asked. He said that it was, but it was too bad that he was a stutterer, as that held him back from his chosen career. About this time it came to the attention of her supervisor that she was asking these questions, and she was reprimanded for putting ‘undue pressure’ on her clients.

Miss Black decided nevertheless to go ahead and rehabilitate some of them. She selected those who were able-bodied and did not seem to have a valid reason to continue to receive welfare funds. With this selected group, she talked over the games ITHY and ‘Indigence’. When they were willing to concede the point, she said that unless they found jobs she was going to cut them off from welfare funds and refer them to a different kind of agency. Several of them almost immediately found employment, some for the first time in years. But they were indignant at her attitude, and some of them wrote letters to her supervisor complaining about it. The supervisor called her in and reprimanded her even more severely on the ground that although her former clients were working, they were not ‘really rehabilitated’. The supervisor indicated that there was some question whether they would retain Miss Black in the agency. Miss Black, as much as she dared without further jeopardizing her position, tactfully tried to elicit what would constitute ‘really rehabilitated’ in the agency’s opinion. This was not clarified. She was only told that she was ‘putting undue pressure’ on people, and the fact that they were supporting their families for the first time in years was in no way to her credit.

Because she needed her job and was now in danger of losing it, some of her friends tried to help. The respected head of a psychiatric clinic wrote to the supervisor, stating that he had heard Miss Black had done some particularly effective work with welfare clients, and asking whether she might discuss her findings at a staff conference at his clinic. The supervisor refused permission.

In this case the rules of ‘Indigent’ were set up by the agency to complement the local rules of ITHY. There was a tacit agreement between the worker and the client which read as follows:

As long as both obeyed the implicit rules, both got what they wanted. The client received his benefits and soon learned what the agency wanted in return: an opportunity to ‘reach out’ (as part of ITHY) plus ‘clinical material’ (to present at ‘client-centred’ staff conferences). The client was glad to comply with these demands, which gave him as much pleasure as it did the agency. Thus they got along well together, and neither felt any desire to terminate such a satisfying relationship. Miss Black, in effect, ‘reached in’ instead of ‘reaching out’, and proposed a ‘community-centred’ staff conference instead of a ‘client-centred’ one; and this disturbed all the others concerned in spite of the fact that she was thus only complying with the stated intent of the regulations.

Two things should be noted here. First, ‘Indigence’ as a game rather than a condition due to physical, mental, or economic disability, is played by only a limited percentage of welfare clients. Second, it will only be supported by social workers who are trained to play ITHY. It will not be well-tolerated by other workers.

Allied games are ‘Veteran’ and ‘Clinic’. ‘Veteran’ displays the same symbiotic relationship, this time between the Veterans Administration, allied organizations, and a certain number of ‘professional veterans’ who share the legitimate privileges of disabled ex-servicemen. ‘Clinic’ is played by a certain percentage of those who attend the out-patient departments of large hospitals. Unlike those who play ‘Indigent’ or ‘Veteran’, patients who play ‘Clinic’ do not receive financial remuneration, but get other advantages. They serve a useful social purpose, since they are willing to cooperate in the training of medical personnel and in studies of disease processes. From this they may get a legitimate Adult satisfaction not available to players of ‘Indigence’ and ‘Veteran’.

Antithesis, if indicated, consists in withholding the benefits. Here the risk is not primarily from the player himself, as in most other games, but from this game being culturally syntonic and fostered by the complementary ITHY players. The threat comes from professional colleagues and the aroused public, government agencies and protective unions. The complaints which follow an exhibition of anti-‘Indigence’ may lead to a loud outcry of ‘Yes, Yes, How About That?’ which may be regarded as a healthy, constructive operation or pastime, even if it occasionally discourages candidness. In fact, the whole American political system of democratic freedoms is based on a licence (not available under many other forms of government) to ask that question. Without such a licence, humanitarian social progress becomes seriously impeded.