How Do You Get Out Of Here

There is no role listed.
Psychology, Transactional Analysis, Underworld Games 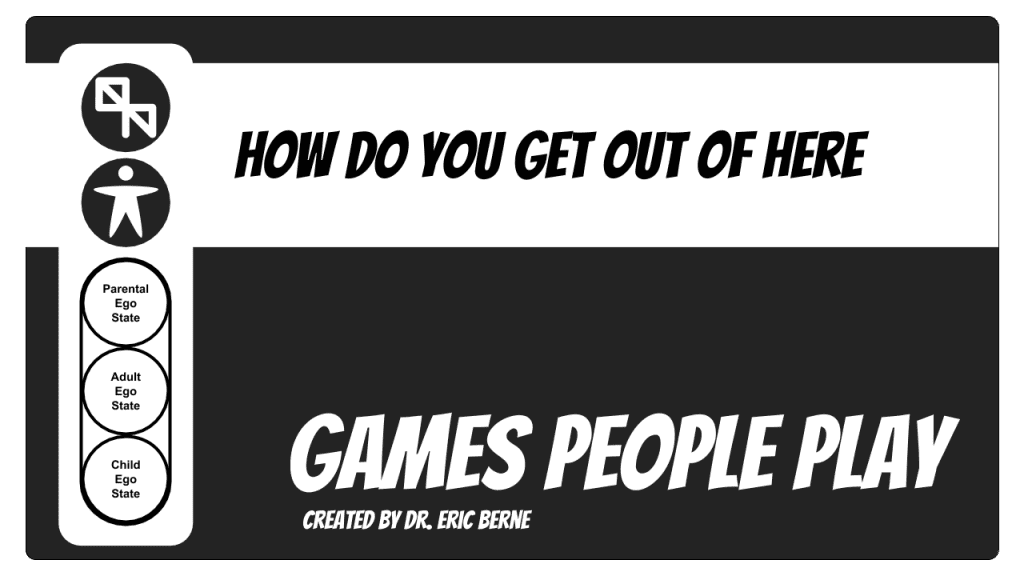 The historical evidence is that those prisoners survive best who have their time structured by an activity, pastime or a game. This is apparently well known to political police, who are said to break some prisoners down simply by keeping them inactive and in a state of social deprivation.

The favoured activity of solitary prisoners is reading or writing books, and the favoured pastime is escape, some of whose practitioners, such as Casanova and Baron Trenck, have become famous.

The favoured game is ‘How Do You Get Out of Here?’ (‘Want Out’), which may also be played in state hospitals. It must be distinguished from the operation(see page 44) of the same name, known as ‘Good Behaviour’. An inmate who really wants to be free will find out how to comply with the authorities so as to be released at the earliest possible moment. Nowadays this may often be accomplished by playing a good game of ‘Psychiatry’, Group Therapy Type. The game of ‘Want Out’, however, is played by inmates or by patients whose Child does not want to get out. They simulate ‘Good Behaviour’, but at the critical point they sabotage themselves so as not to be released. Thus in ‘Good Behaviour’ Parent, Adult and Child work together to be discharged; in ‘Want Out’ Parent and Adult go through the prescribed motions until the critical moment, when the Child, who is actually frightened at the prospect of venturing into the uncertain world, takes over and spoils the effect. ‘Want Out’ was common in the late 1930s among recently arrived immigrants from Germany who became psychotic. They would improve and beg for release from the hospital; but as the day of liberation approached, their psychotic manifestations would recur.

A close relative of ‘Want Out’ is an operation called ‘You’ve Got to Listen’. Here the inmate of an institution or the client of a social agency demands the right to make complaints. The complaints are often irrelevant. His main purpose is to assure himself that he will be listened to by the authorities. If they make the mistake of thinking that he expects the complaints to be acted on and cut him off as too demanding, there may be trouble. If they accede to his demands, he will increase them. If they merely listen patiently and with signs of interest, the ‘You’ve Got to Listen’ player will be satisfied and cooperative, and will not ask for anything more. The administrator must learn to distinguish ‘You’ve Got to Listen’ from serious demands for remedial action.

Bum Rap’ is another game that belongs in this family. A straight criminal may holler ‘Bum Rap’ in a real effort to get out, in which case it is part of the procedure. The inmate who plays ‘Bum Rap’ as a game, however, does not use it effectively to try to get out, since if he gets out he will no longer have much excuse to holler.

Both ‘Good Behaviour’ and ‘Want Out’ are recognized by alert administrators and can be dealt with at the executive level. Beginners in group therapy, however, are often taken in. A competent group therapist, knowing these are the most frequent manipulations in psychiatrically oriented prisons, will be watching for them and will ferret them out at an early phase. Since ‘Good Behaviour’ is an honest operation, it may be treated as such, and there is no harm in discussing it openly. ‘Want Out’, on the other hand, requires active therapy if the frightened inmate is to be rehabilitated.