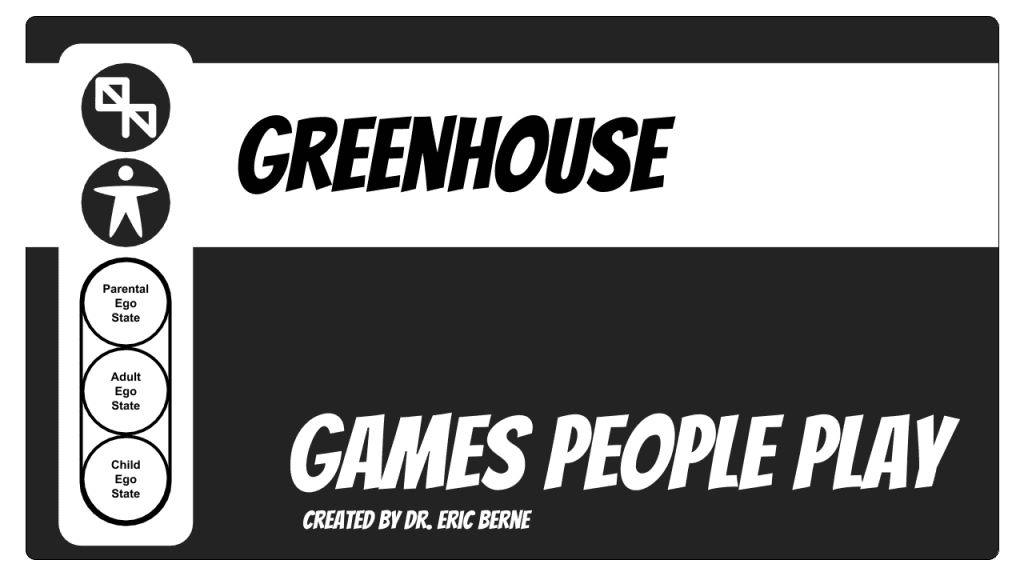 This is a variation of ‘Psychiatry’, which is played hardest by young social scientists, such as clinical psychologists. In the company of their colleagues these young people tend to play ‘Psychoanalysis’, often in a jocular way, using such expressions as ‘Your hostility is showing’ or ‘How mechanical can a defence mechanism get?’ This is usually a harmless and enjoyable pastime; it is a normal phase of their learning experience, and with a few originals in the group it can become quite amusing. (This writer’s preference is, ‘I see National Parapraxis Week is here again.’) As patients in psychotherapy groups some of these people are apt to indulge in this mutual critique more seriously; but since it is not highly productive in that situation, it may have to be headed off by the therapist. The proceedings may then turn into a game of ‘Greenhouse’.

There is a strong tendency for recent graduates to have an exaggerated respect for what they call ‘Genuine Feelings’. The expression of such a feeling may be preceded by an announcement that it is on its way. After the announcement, the feeling is described, or rather presented before the group, as though it were a rare flower which should be regarded with awe. The reactions of the other members are received very solemnly, and they take on the air of connoisseurs at a botanical garden. The problem seems to be, in the jargon of game analysis, whether this one is good enough to be exhibited in the National Feeling Show. A questioning intervention by the therapist may be strongly resented, as though he were some clumsy-fingered clod mauling the fragile petals of an exotic century plant. The therapist, naturally, feels that in order to understand the anatomy and physiology of a flower, it may be necessary to dissect it.

The antithesis, which is crucial for therapeutic progress, is the irony of the above description. If this game is allowed to proceed, it may go on unchanged for years, after which the patient may feel that he has had a ‘therapeutic experience’ during which he has ‘expressed hostility’ and learned to ‘face feelings’ in a way which gives him an advantage over less fortunate colleagues. Meanwhile very little of dynamic significance may have happened, and certainly the investment of time has not been used to maximum therapeutic advantage.

The irony in the initial description is directed not against the patients but against their teachers and the cultural milieu which encourages such over-fastidiousness. If properly timed, a sceptical remark may successfully divorce them from foppish Parental influences and lead to a less self-conscious robustness in their transactions with each other. Instead of cultivating feelings in a kind of hothouse atmosphere, they may just let them grow naturally, to be plucked when they are ripe.

The most obvious advantage of this game is the external psychological, since it avoids intimacy by setting up special conditions under which feelings may be expressed, and special restrictions on the responses of those present.