Let's Pull a Fast One on Joey

There is no role listed.
Psychology, Transactional Analysis, Underworld Games 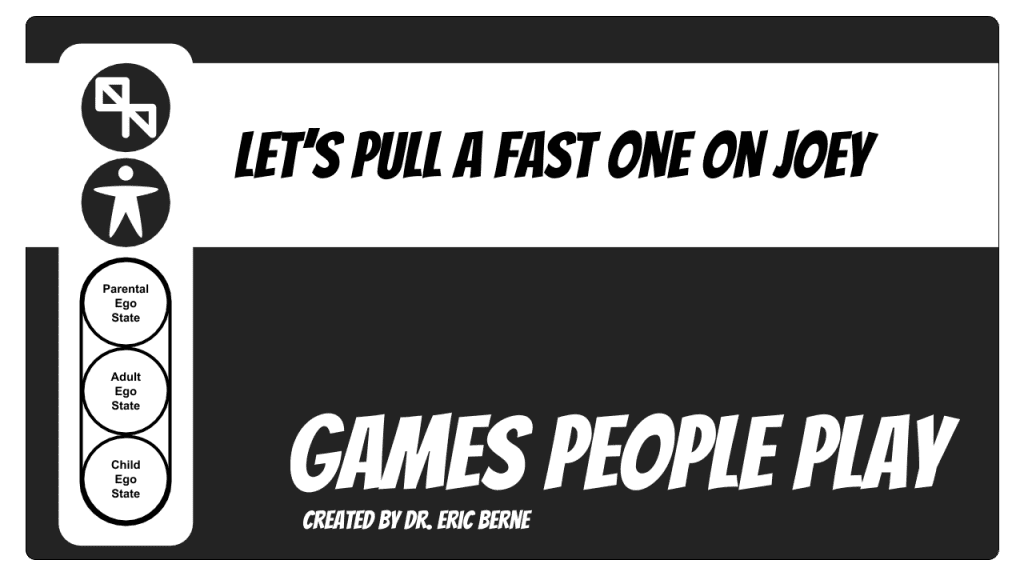 The prototype of this game is ‘The Big Store’, the big-time confidence game, but many small grifts and even the badger game are FOOJY. No man can be beaten at FOOJY unless he has larceny in his veins, because the first move is for Black to tell White that dumb-honest-old-Joey is just waiting to be taken. If White were completely honest, he would either back off or warn Joey, but he doesn’t. Just as Joey is about to pay off, something goes wrong, and White finds that his investment is gone. Or in the badger game, just as Joey is about to be cuckolded, he happens to walk in. Then White, who was playing his own rules in his own honest way, finds that he has to play Joey’s rules, and they hurt.

Curiously enough, the mark is supposed to know the rules of FOOJY and stick to them. Honest squawking is a calculated risk of the con mob; they will not hold that against White, and he is even allowed a certain latitude in lying to the police to save his face. But if he goes too far and accuses them falsely of burglary, for example, that is cheating, and they resent it. On the other hand, there is little sympathy for a con man who gets into trouble by working a mark who is drunk, since this is improper procedure, and he should know better. The same applies if he is stupid enough to pick a mark with a sense of humour, since it is well known that such people cannot be trusted to play the straight man in FOOJY all the way down the line through the terminal game of ‘Cops and Robbers’. Experienced con men are scared of marks who laugh after they have been taken.

It is evident that FOOJY is a three- or four-handed game, with the police playing the fourth hand, and that it is related to ‘Let’s You and Him Fight’.