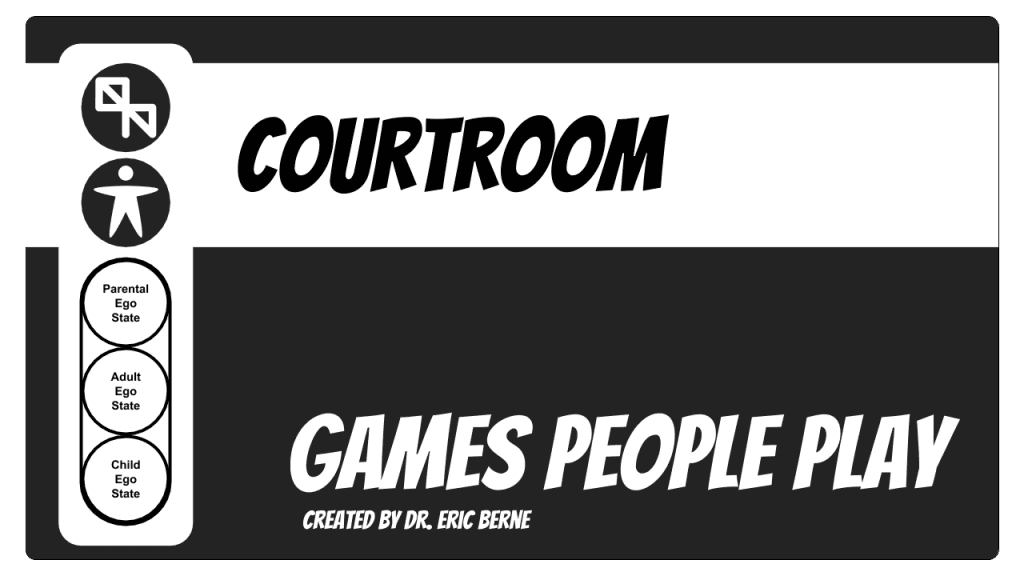 Descriptively this belongs to the class of games which find their most florid expressions in law, and which includes ‘Wooden Leg’ (the plea of insanity) and ‘Debtor’ (the civil suit). Clinically it is most often seen in marital counselling and marital psychotherapy groups. Indeed, some marital counselling and marital groups consist of a perpetual game of ‘Courtroom’ in which nothing is resolved, since the game is never broken up. In such cases it becomes evident that the counsellor or therapist is heavily involved in the game without being aware of it.

‘Courtroom’ can be played by any number, but is essentially three-handed, with a plaintiff, a defendant and a judge, represented by a husband, a wife and the therapist. If it is played in a therapy group or over the radio or TV, the other members of the audience are cast as the jury. The husband begins plaintively, ‘Let me tell you what (wife’s name) did yesterday. She took the…’ etc., etc. The wife then responds defensively, ‘Here is the way it really was… and besides just before that he was… and anyway at the time we were both…’ etc. The husband adds gallantly, ‘Well, I’m glad you people have a chance to hear both sides of the story, I only want to be fair.’ At this point the counsellor says judiciously, ‘It seems to me that if we consider…’ etc., etc. If there is an audience, the therapist may throw it to them with: ‘Well, let’s hear what the others have to say.’ Or, if the group is already trained, they will play the jury without any instruction from him.

The therapist says to the husband, ‘You’re absolutely right!’ If the husband relaxes complacently or triumphantly, the therapist asks: ‘How do you feel about my saying that?’ The husband replies: ‘Fine.’ Then the therapist says, ‘Actually, I feel you’re in the wrong.’ If the husband is honest, he will say: ‘I knew that all along.’ If he is not honest, he will show some reaction that makes it clear a game is in progress. Then it becomes possible to go into the matter further. The game element lies in the fact that while the plaintiff is overtly clamouring for victory, fundamentally he believes that he is wrong.

After sufficient clinical material has been gathered to clarify the situation, the game can be interdicted by a manoeuvre which is one of the most elegant in the whole art of antithetics. The therapist makes a rule prohibiting the use of the (grammatical) third person in the group. Thenceforward the members can only address each other directly as ‘you’ or talk about themselves as ‘I’, but they cannot say, ‘Let me tell you about him ‘or’ Let me tell you about her’. At this point the couple stop playing games in the group altogether, or shift into ‘Sweetheart’ which is some improvement or take up ‘Furthermore’ which is no help at all. ‘Sweetheart’ is described in another section (page 94). In ‘Furthermore’ the plaintiff makes one accusation after the other. The defendant replies to each ‘I can explain’. The plaintiff pays no attention to the explanation, but as soon as the defendant pauses, he launches into his next indictment with another ‘furthermore’, which is followed by another explanation—a typical Parent-Child interchange.

‘Furthermore’ is played most intensively by paranoid defendants. Because of their literalness, it is particularly easy for them to frustrate accusers who express themselves in humorous or metaphorical terms. In general, metaphors are the most obvious traps to avoid in a game of ‘Furthermore’.

In its everyday form, ‘Courtroom’ is easily observed in children as a three-handed game between two siblings and a parent. ‘Mummy, she took my candy away.’ ‘Yes, but he took my doll, and before that he was hitting me, and anyway we both promised to share our candy.’

Adult: ‘The real facts are these.’