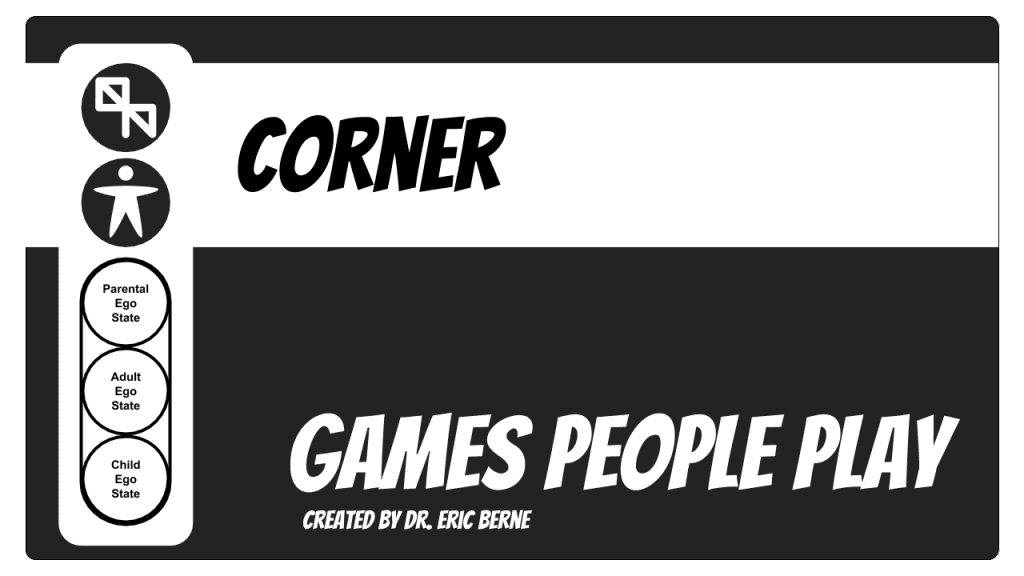 Corner illustrates more clearly than most games their manipulative aspect and their function as barriers to intimacy. Paradoxically, it consists of a disingenuous refusal to play the game of another.

There are two possible gimmicks in this game:

In each of these cases the winner’s position is, from a naïve standpoint, irreproachable; all he or she has done is take the other literally. This is clearer in (B), where White takes Mrs White’s refusal to go at face value. They both know that this is cheating, but since she said it, she is cornered.

The most obvious gain here is the external psychological. Both of them find movies sexually stimulating, and it is more or less anticipated that after they return from the theatre, they will make love. Hence whichever one of them wants to avoid intimacy sets up the game in move (2a) or (2b). This is a particularly exasperating variety of ‘Uproar’ (see Chapter 9). The ‘wronged’ party can, of course, make a good case for not wanting to make love in a state of justifiable indignation, and the cornered spouse has no recourse.

This is simple for Mrs White. All she has to do is change her mind, take her husband by the arm, smile and go along with him (a shift from Child to Adult ego state). It is more difficult for Mr White, since she now has the initiative; but if he reviews the whole situation, he may be able to coax her into going along with him, either as a sulky Child who has been placated or, better, as an Adult.

‘Corner’ is found in a somewhat different form as a family game involving the children, where it resembles the ‘double-bind’ described by Bateson and his associates. Here the child is cornered, so that whatever he does is wrong. According to the Bateson school this may be an important etiological factor in schizophrenia. In the present language, then, schizophrenia may be a child’s antithesis to ‘Corner’. Experience in treating adult schizophrenics with game analysis bears this out—that is, if the family game of ‘Corner’ is analysed to demonstrate that the schizophrenic behaviour was and is specifically undertaken to counter this game, partial or total remission occurs in a properly prepared patient.

An everyday form of ‘Corner’ which is played by the whole family and is most likely to affect the character development of the younger children occurs with meddlesome ‘Parental’ parents. The little boy or girl is urged to be more helpful around the house, but when he is, the parents find fault with what he does—a homely example of ‘damned if you do and damned if you don’t’. This ‘double-bind’ may be called the Dilemma Type of ‘Corner’.

‘Corner’ is sometimes found as an etiological factor in asthmatic children.

Little girl: ‘Mummy, do you love me?’

This answer leaves the child with no direct recourse. She wants to talk about mother, and mother switches the subject to philosophy, which the little girl is not equipped to handle. She begins to breathe hard, mother is irritated, asthma sets in, mother apologizes and the ‘Asthma Game’ now runs its course. This ‘Asthma’ type of ‘Corner’ remains to be studied further.

An elegant variant, which may be called the ‘Russell-Whitehead Type’ of ‘Corner’, sometimes occurs in therapy groups.

Black: ‘Well, anyway, when we’re silent nobody is playing games.’

White: ‘Silence itself may be a game.’

Red: ‘Nobody was playing games today.’

White: ‘But not playing games may itself be a game.’

The therapeutic antithesis is equally elegant. Logical paradoxes are forbidden. When White is deprived of this manoeuvre, his underlying anxieties come quickly to the fore.

Closely allied to ‘Corner’ on the one hand, and to ‘Threadbare’ on the other, is the marital game of ‘Lunch Bag’. The husband, who can well afford to have lunch at a good restaurant, nevertheless makes himself a few sandwiches every morning, which he takes to the office in a paper bag. In this way he uses up crusts of bread, leftovers from dinner and paper bags which his wife saves for him. This gives him complete control over the family finances, for what wife would dare buy herself a mink stole in the face of such self-sacrifice? The husband reaps numerous other advantages, such as the privilege of eating lunch by himself and of catching up on his work during lunch hour. In many ways this is a constructive game which Benjamin Franklin would have approved of, since it encourages the virtues of thrift, hard work and punctuality.