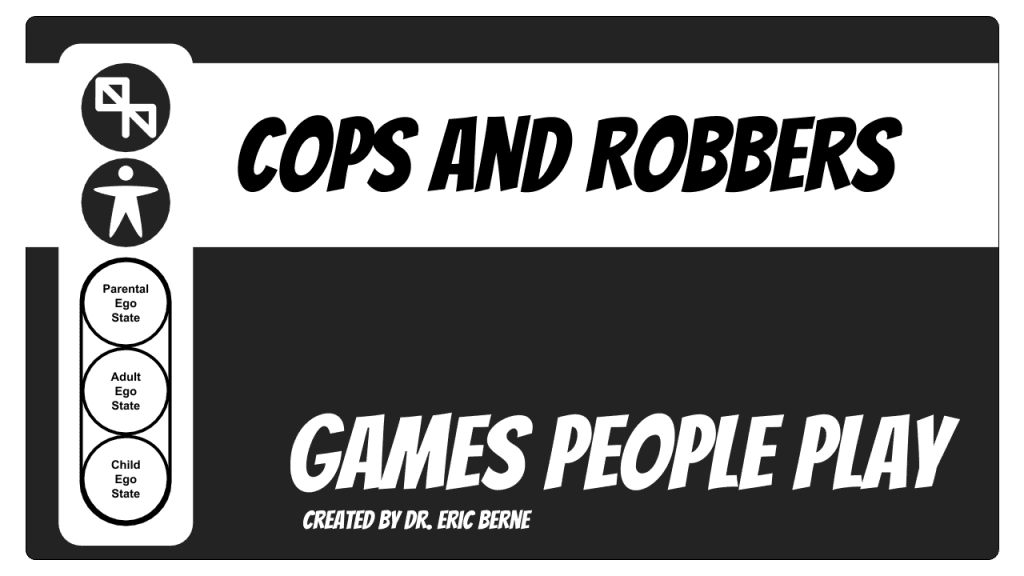 Because many criminals are cop-haters, they seem to get as much satisfaction from outwitting the police as from their criminal gains, often more. Their crimes, at the Adult level, are games played for the material rewards, the take; but at the Child level it is the thrill of the chase: the getaway and the cool-off.

Curiously enough, the childhood prototype of ‘Cops and Robbers’ is not cops and robbers but hide-and-seek, in which the essential element is the chagrin at being found. Younger children readily betray this. If father finds them too easily, the chagrin is there without much fun. But father, if he is a good player, knows what to do: he holds off, whereupon the little boy gives him a clue by calling out, dropping something or banging. Thus he forces father to find him, but still shows chagrin; this time he has had more fun because of the increased suspense. If father gives up, the boy usually feels disappointed rather than victorious. Since the fun of being hidden was there, evidently that is not where the trouble lies. What he is disappointed about is not being caught. When his turn comes to hide, father knows he is not supposed to outwit the little boy for very long, just long enough to make it fun; and he is wise enough to look chagrined when he is caught. It soon becomes clear that being found is the necessary payoff.

Hence hide-and-seek is not a mere pastime but a true game. At the social level it is a battle of wits, and is most satisfying when the Adult of each player does his best; at the psychological level, however, it is set up like compulsive gambling, in which White’s Adult has to lose in order for his Child to win. Not being caught is actually the antithesis. Among older children, one who finds an insoluble hiding place is regarded as not being a good sport, since he has spoiled the game. He has eliminated the Child element and turned the whole thing into an Adult procedure. He is no longer playing for fun. He is in the same class as the owner of a casino, or some professional criminals, who are really out for money rather than sport.

There seem to be two distinctive types of habitual criminals: those who are in crime primarily for profit, and those who are in it primarily for the game—with a large group in between who can handle it either way. The ‘compulsive winner’, the big moneymaker whose Child really does not want to be caught, rarely is, according to reports; he is an untouchable, for whom the fix is always in. The ‘compulsive loser’, on the other hand, who is playing ‘Cops and Robbers’ (C & R), seldom does very well financially. The exceptions to this often seem to be due to luck rather than skill; in the long run even the lucky ones usually end up as their Child requires, squawking rather than riding high.

The C & R player, with whom we are concerned here, in some ways resembles the Alcoholic. He can shift roles from Robber to Cop and from Cop to Robber. In some cases he may play the Parental Cop during the day and the Child Robber after dark. There is a Cop in many Robbers, and a Robber in many Cops. If the criminal ‘reforms’, he may play the role of Rescuer, becoming a social worker or a mission worker; but the Rescuer is far less important in this game than in ‘Alcoholic’. Ordinarily, however, the player’s role as Robber is his destiny, and each has his own modus operandi for getting caught. He may make it tough or easy for the Cops.

The situation is similar with gamblers. At the social or sociological level a ‘professional’ gambler is one whose chief interest in life is gambling. But at the psychological level there are two different kinds of people who are professional gamblers. There are those who spend their time gaming, i.e., playing with Fate, in whom the strength of the Adult’s desire to win is exceeded only by the strength of the Child’s need to lose. Then there are those who run gambling houses and actually do earn a living, usually a very good one, by providing opportunities for gamesters to play; they themselves are not playing, and try to avoid playing, although occasionally under certain conditions they will indulge themselves and enjoy it, just as a straight criminal may occasionally play a game of C & R.

This throws light on why sociological and psychological studies of criminals have been generally ambiguous and unproductive: they are dealing with two different kinds of people who cannot be adequately differentiated in the ordinary theoretical or empirical frameworks. The same is true in studying gamblers. Transactional and game analyses offer an immediate solution for this. They remove the ambiguity by distinguishing transactionally, below the social level, between ‘players’ and ‘straight professionals’.

Let us now turn from this general thesis to consider specific examples. Some burglars do their jobs without any waste motion. The ‘Cops and Robbers’ burglar leaves his calling card in gratuitous acts of vandalism, such as spoiling valuable clothing with secretions and excretions. The straight bank robber, according to reports, takes every possible precaution to avoid violence; the C & R bank robber is only looking for an excuse to vent his anger. Like any professional, a straight criminal likes his jobs to be as clean as circumstances permit. The C & R criminal is compelled to blow off steam in the course of his work. The true professional is said never to operate until the fix is in; the player is willing to take on the law barehanded. Straight professionals are well aware, in their own way, of the game of C & R. If a gang member shows too much interest in the game, to the point of jeopardizing the job, and particularly if his need to be caught begins to show, they will take drastic measures to prevent a recurrence. Perhaps it is just because straight professionals are not playing C & R that they are so seldom caught, and hence so rarely studied sociologically, psychologically and psychiatrically; and this also applies to gamblers. Hence most of our clinical knowledge about criminals and gamblers refers to players rather than to straight professionals.

Kleptomaniacs (as opposed to professional shoplifters) are examples of how widely trivial C & R is played. It is probable that a very large percentage of Occidentals, at least, have played C & R in fantasy, and that is what sells newspapers in our half of the world. This fantasy frequently occurs in the form of dreaming up the ‘perfect murder’, which is playing the hardest possible game and completely outwitting the cops.

Variations of C & R are ‘Auditors and Robbers’, played by embezzlers with the same rules and the same payoff; ‘Customs and Robbers’, played by smugglers, etc. Of special interest is the criminal variation of ‘Courtroom’. Despite all his precautions, the professional may occasionally be arrested and brought to trial. For him’ Courtroom’ is a procedure, which he carries out according to the instructions of his legal advisers. For the lawyers, if they are compulsive winners, ‘Courtroom’ is essentially a game played with the jury in which the object is to win, not lose, and this is regarded as a constructive game by a large segment of society.

This is the concern of qualified criminologists rather than psychiatrists. The police and judiciary apparatus are not antithetical, but are playing their roles in the game under the rules set up by society. One thing should be emphasized, however. Research workers in criminology may joke that some criminals behave as though they enjoyed the chase and wanted to be caught, or they may read the idea and agree in a deferential way. But they show little tendency to consider such an ‘academic’ factor as decisive in their ‘serious’ work. For one thing, there is no way to unmask this element through the standard methods of psychological research. The investigator must therefore either overlook a crucial point because he cannot work it with his research tools, or else change his tools. The fact is that those tools have so far not yielded one single solution to any problem in criminology. Researchers might therefore be better off discarding the old methods and tackling the problem freshly. Until C & R is accepted not merely as an interesting anomaly, but as the very heart of the matter in a significant percentage of cases, much research in criminology will continue to deal with trivialities, doctrines, peripheral issues or irrelevancies.

Child: ‘You must catch me.’